StampARTic is a online magazine for card makers and scrappers. This is my first Design Team contribution for StampARTic. This is my DT inspiration for their new challenge " Anything goes".

This Mixed Media was made a few weeks ago, when I entered the European Scrap Battle in Mixed Media. I have only been doing Mixed Media for half a year, so I entered just to challenge myself.

The task was to do a project and use one word related to Mixed Media. I had just been emptying two sewing machines, three computers and four clocks for things that could be used in Mixed Media. My husband just looked at it all an thought I was mad. So when I asked him what word he thought fitted with me and Mixed Media - he was rather quick and said: Hoarder, with a smile ;) I could actually see that - and that became my word. 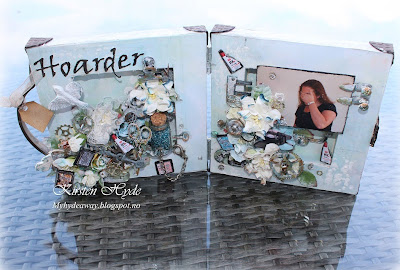 This is made of two small canvases fixed together with hinges. I have used the paper Destination Delight from Prima and made some background effects on the background with gesso, stencils and lace. I made the canvases look like a suitcase on the outside, made paper corners, fixed a drawer handle to one side and an altered paper keyhole (Tim Holts Hardware findings die) to the other side. Inside the suitcase, I have used a lot of flowers, smaller bits from the clocks and computers. I also printed out a photo of a bigshot, RX glue and distress ink pads. The photos of the distress ink pads was glued to keyboard keys, and made perfect small distress ink pads.

This film from You-tube was also part of my inspiration for this project ;)