A steampunk/mixed media Easter egg with "The Ultimate Answer"

It is always difficult to make something for a man. So I had a go with an Easter egg. The first Idea came from  Trine Lise - who used a zip to decorate her egg. I decided that it could be interesting to make an egg that opens with a Zip as well. So I had a go. 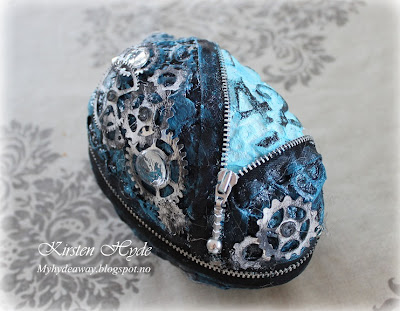 This is a cardboard Easter egg. First i glued, chipboard numbers and, and different metal nuts and ring pulls onto the egg. Then, I covered the egg with metal tape and worked the tape around the raised embellishment under the tape. The egg was painted light blue with a mix of Gesso and dylusions spray. 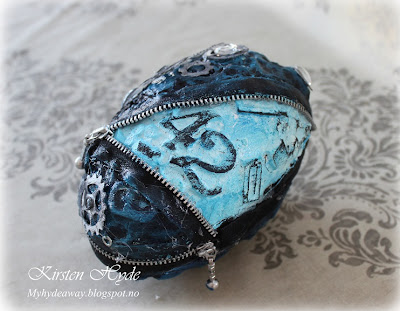 Then I glued the Zip around the egg and another Zip, half open, to the top of the egg. The egg was then painted with darker blue paint, and blue paint in different colours to create an effect on the raised embellishment. The number 42 is just a joke after the film Hitchhiker's Guide To The Galaxy - and is the answer to the ultimate question  "the answer to life, universe and everything". 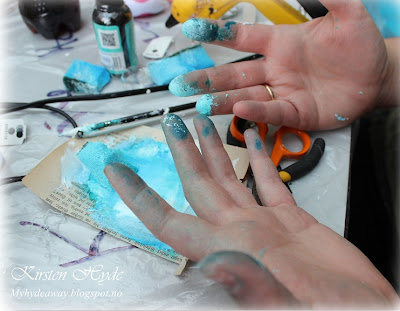 Gesso and dylusions sprays are in general a bit messy.... (Photo by: Gunn-Eirill Gjelseth-Rauan) 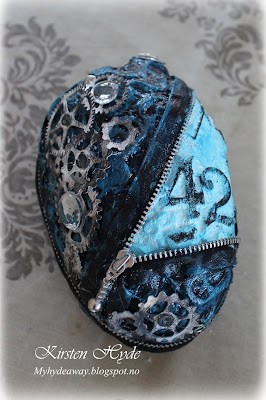 The egg was then sprayed with lacquer. I added a few gears, cut from silver paper with a silhouette machine, a few metal nuts and Glass Cabochon.